Looks like the Slow Boat has gotten even slower...

Okay, so you want some really slow boats, do you? 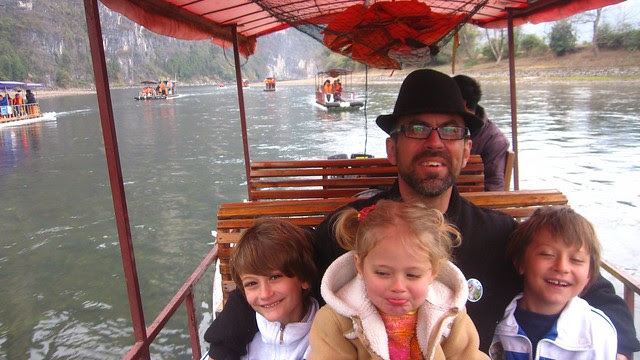 Here's one of them, with me and the kids on it. A couple of weeks ago, I single-dadded the kids for 36 hours on the train, from our conference in Hong Kong back home to Chengdu. On the way, we stopped by Guilin, and the nearby backpacker town of Yangshou. The picture is of us on the Li River, en route to Yangshuo, with us and our luggage on a homemade bamboo raft, chugging slowly downstream through a forest of "bloopy mountains", as we called them. 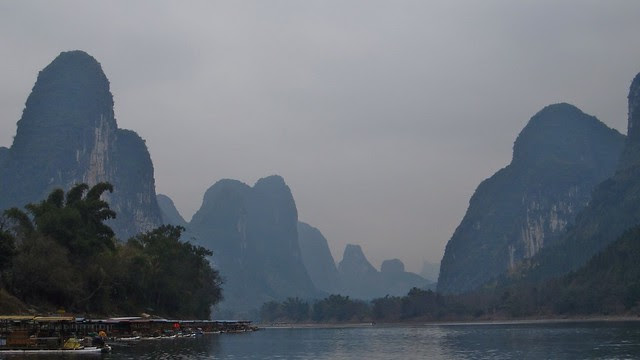 You'll notice our butts are not in the first picture, mostly because we nearly froze them off at times. Because most of our traveling was in Thailand, we packed only the very basics of cold weather gear, and Yangshou in the winter is very chilly, clammy and wet. But we huddled together on our bench on the raft, and had fun biking around the town once we got used to the weather a bit. Having lots of good reasonably priced restaurants around and a good kids' movie selection at the hostel we stayed at sure didn't hurt, either. 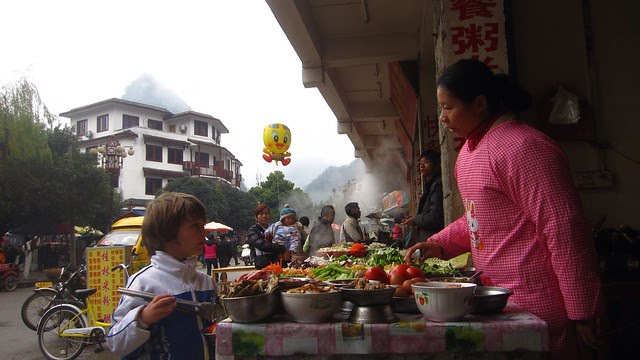 Xander can now order up a mean bowl of street vendor soup!
So yep, I've been a single dad for the past couple of weeks, rediscovering some board games, starting back into teaching, and keeping myself occupied. Blogging has fallen, however, by the wayside, and doesn't look to be resuming for the next week or three at least. I haven't quite gotten the hang of writing blog posts effortlessly from our iPad, and since we've gotten home, I've been unable to get our laptop online. (Except for Skype, oddly enough.) With the combination of a slow local network that's often overwhelmed by students, a now ancient (2006) MacBook, and the varying internet policies of our host government, it's never easy to track down the cause of internet weirdness here.

However, I got a pretty big hint the other night, when our laptop refused to start up. The power had been off all day, and when it came back on... nuthin'. Or rather, a grey screen, followed by a progress bar which freezes, followed by the computer shutting down again, for those of you who are interested in such things. And yes, I did try to do a safe boot, reset the NVRAM/PRAM, and all sorts of other technogeekery, all to no avail.

So it's off to Chengdu tomorrow to see what the Apple authorized maintenance folks can do. Apparently, out of the fifteen or twenty "Apple Stores" that have sprouted up in Chengdu over the last year or two, there is one repair shop that is licensed by Apple to make warranty repairs. Even though our computer is out of warranty. (It's in the building with the KFC in it, across from the other computer city building. On the ninth floor, which you get to by taking the elevator up to the seventh floor and then walking up two flights of escalators that don't work, then continuing down the hallway and taking a left past the second of three HP printer repair shops. Go past the sign that says "Beware of Tigers" in Chinese, take another left past the dilapidated men's room that smells like a cat lady has set up shop in the dirtiest truck stop bathroom imaginable, and when you come to a room full of discarded office furniture and barrels of industrial solvents, you're almost there.)

Oh, and does anyone know the Chinese for "cooling fan"? Wish me luck, everyone!

So where to start..? 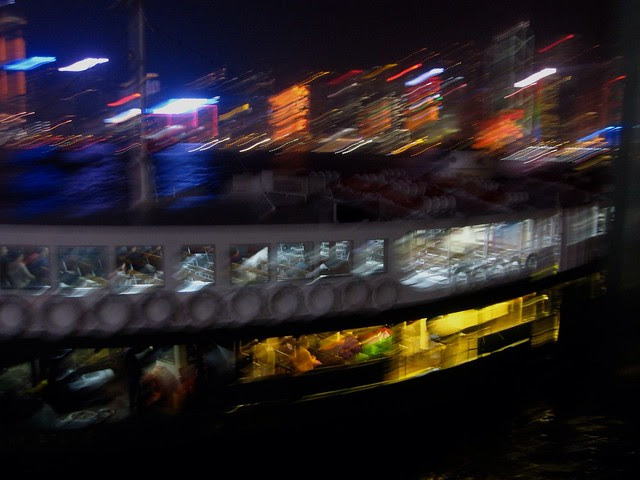 Hmm, how about "I'm back!" After some time off in Thailand, a conference with our organization in Hong Kong, and two overnight train rides across a good chuk of southern China, the kids and I are back at home outside of Chengdu, where it's just a bit, um, colder than it was in Thailand.

You'll notice that I said "the kids and I" - Jane is still just outside of Bangkok, where she is participating in an ecovillage design conference. It's a great opportunity for her, and ties directly in to several paths that she'd like to take professionally once we leave China. The conference has been a long one - seven weeks total - which puts her back in China by the first week of March.

So in the meantime, I'm here at home single dadding it, which I'm enjoying in an ever so slightly hermit-ish kind of way. Classes don't start for another week, and because the weather has been so gukky (yes, that's a word), I've been enjoying spending some time at home with them, with no big plans other than making sure they've been properly introduced to all of the Star Wars movies and an extended Monopoly game or five. And while the Lego intergalactic trade routes have been established through our household (much to the chagrim of Ysa, who would rather be playing school), Im slowly finding a balance between easing back in to the China groove on one hand, and planning ahead for our next steps after our time with MCC ends this summer on the other.

Which means writing reports for our organization, writing lesson plans, and getting a resume or six into circulation. Balanced by an occasional dose of procrastination. (My routine for writing material for a deadline: 1) Spend an entire day doing Absolutely Nothing Productive when I know I should be writing. 2) During this time, become increasingly grumpy and frustrated. Give up on any hope of ever getting anything useful done Ever. 3) Open a Word document. Decide on the formatting and the font. Write a sentence, then delet it. 4) Go to bed in frustration after looking at a few web pages vaguely related to the topic. 5) Wake up with the introductory sentence fully formed in my head, with the next five paragraphs writing themselves within a half hour. 6) Wish that I could send a note back in time to my yesterday's self to tell him to chill out a bit and stop the worrying already.)

So in and amongst my routine, I hope to be back to life on the blog again, if only to reassure friends and relatives that yes, we're still around. Content will, as always, be fairly nonlinear, and there will probably be the usual nonapologetic random pauses between posts. (By now, this (and the addition of randomly nested paranthetical remarks) should come as no suprise.)