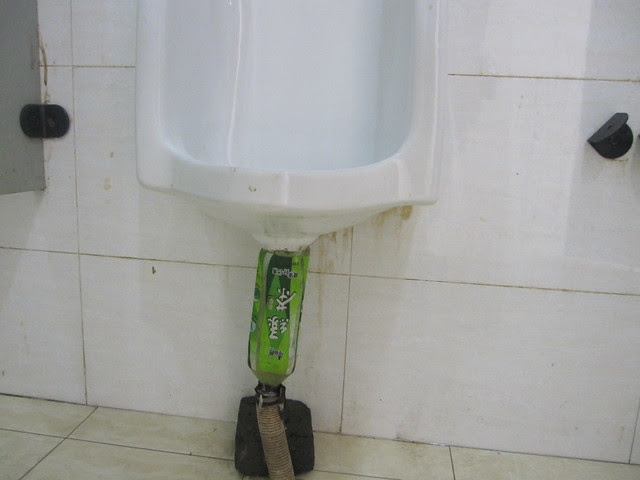 Don't know if this proves that the Chinese are in no way capable of taking over the world, or in fact the total opposite, but here, for what it's worth, is a repair job that I noticed in the mens' room in the new high speed section of the Nanchong train station.

Yes, the only thing connecting the bottom of that urinal to the floor drain is a green plastic iced tea bottle. And yes, in fact, every single urinal in the bathroom used a different kind of soda bottle for the exact same repair in the very same position. And no, I did not stand around documenting them all photographically - I got enough strange looks by being a foreigner with a camera in the mens' room as it was.... 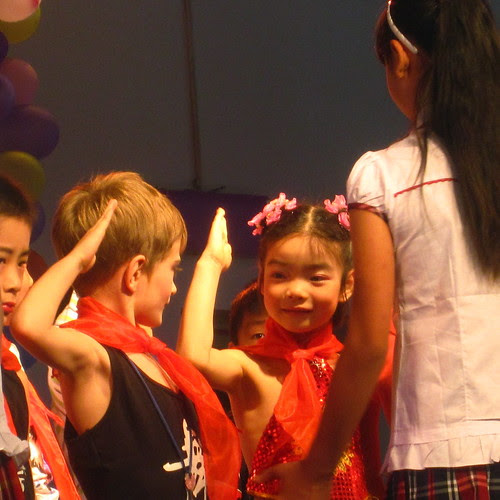 Around the first of May, Xander was sworn into the Young Pioneers, which means more or less that he's in the Honor Roll, except with the added bonus that he could also be on track to join the Communist Party of China. The main thing is that he gets to wear a red scarf every day to school, and he gets a nifty plastic pin with a red star on it. Xander, externally motivated student that he is, was crushed last fall when he didn't get a red scarf like the "good kids" in the class, and thought for a while that he was a Bad Student, so now he's been officially recognized.

And yes, teachers in China (well, at least in Xander's school) are very up front about separating the sheep from the goats in that way. Good students often get to sit up front close to the teacher, with the bad kids towards the back. For a couple of days, Xander refused to play with a friend of his because the teacher had mentioned that she hadn't done her math homework well enough. Yeah, we had to have a talk with him about that one...

Turns out that he hadn't gotten his red scarf last fall because, understandably, his teachers weren't quite sure what we as parents would think. We said fine, as long as they ignored all of the reports to the Central Committee that he was sure to make on us (joke!), and so he got his scarf in an all school awards ceremony, complete with an honor guard, a speech to the gathered parents from a vice president of the university, and, of course, synchronized dance performances.

The music that was playing while they were being led up to the stage? The theme song from the 1960 American Western The Magnificent Seven. (Which was itself a copy of Kurasawa's Seven Samurai.)

Stuff we all should know by now: trains can work 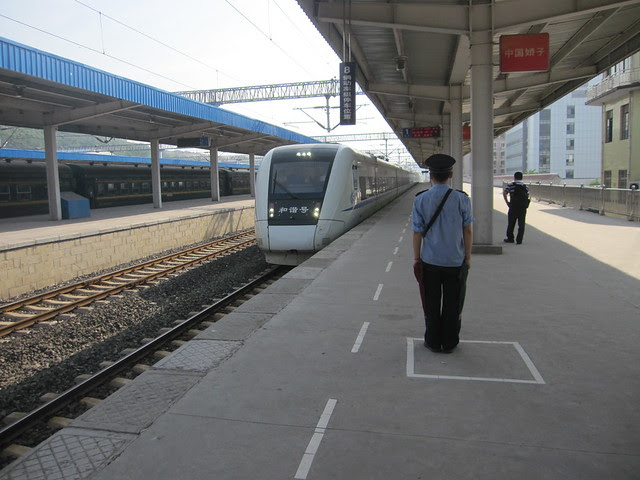 Okay, and here I go trying to make sense of everything right off. One series of rants on the soapbox - errrr, make that posts - that I've been thinking about lately is "Stuff that we all should have figured out a long time ago but somehow still have a problem wrapping our brains around for reasons unknown."

Which I've conveniently shortened to "Stuff we all should know by now."

Rather than a long winded intro, which really is implicit in the title, let's lead on by example, shall we? Remember Carmageddon? Okay, neither do I - it was a media hype induced minor panic, from this summer, apparently because some two mile stretch of highway in L.A. was due to close in its entirety over a weekend. Or something.

Anyway, one post from the aforementioned media frenzy caught my eye - one of the guys over at Freakonomics doing a very simple "apples to apples" comparison of the number of people carried per hour by one lane of traffic versus the number of people a single commuter rail line, which takes up less space in a city, can carry.

The math is explained in a bit more detail in the article, but it basically boils down to this: one lane of traffic, under optimal conditions, can carry up to 2000 people per hour. A well-operated train line? Up to 40,000 people per hour.

So which system do we go with in America? Why, the system that makes the least sense, of course. Why? Beats me. Something to do with paragraph number one of this post, I suppose... Stay tuned for more.

Up to no good

The first and last time you will hear me mention this movie on this web site. Ever.


One of the advantages of being in an undisclosed location with not many responsibilities other than to entertain my son as he happily recuperates is that I've been able to get a huge amount of work done. I've planned all my classes for next semester, I've been able to study Chinese four hours each day, I've ghostwritten several speeches for Hillary Clinton, I've... well, okay, I exaggerate a bit.

True geek confession? I've watched the George Lucas-produced animated Clone Wars series on DVD with my son (you know, the stuff that happened between the two last Star Wars movies that shouldn't have been made in the first place?), and surfed the internet a lot. Yep, it's (enforced) staycation time here at Slow Boat Central.

Now, mind you, I have actually gotten a few things done in the midst of all of this. Doctor's appointments are being made and kept, and the laundry is getting done. The middle to longer range planning tasks are getting checked off the list, bit by bit. And just the other day I went for a walk, played air hockey, AND made two sandwiches!

The things that haven't happened as frequently as I thought they might are regular updates to the blog. I haven't been terribly worried about this, but I have been puzzled. After all, although I can't see myself ever writing another sentence about Clone Wars ever again in my life after this one, I have been running into some cool stuff on my journeys through the internet, and there are all sorts of experiences from last Spring and insights from my break here in the States, and a few observations on politics and life and, and... I haven't been inspired to write any of it down.

And then it hit me - wait a minute, I've been waiting for everything to make sense! I have all of these big ideas about long series of blog articles that my experiences will fit into, and, hmmm, they don't really add up to anything much. (Or if they do, they seem pretentious or obvious or boring.) Silly me! Here I am, thinking that I can go from one of the most surreal countries on the planet to the second most surreal country, with a bit of the third country of the internet thrown in for good measure, and still be able to share something that's coherent in five paragraphs or less.

So what does this all mean? Bring on the random! Yeah, yeah, I know - as if this blog wasn't random enough already, right? Actually, this is yet another post where I'm simply giving myself permission to write, and I should probably delete it immediately. Except I won't, because, hey, it's my blog and I can do what I want to with it. And because, as much as I hate to admit it, Clone Wars is kinda cool...

So in the time that it took Barack Obama to run for president, get elected, get everyone excited about this Hope thingie, propose the first high speed rail network ever, and then get sucked into a political quagmire and recession and have everyone in the country basically forget about the whole environmental thing... ...China had a huge earthquake, recovered from it, and built some thousand plus miles of high speed train tracks, including a short line from Chengdu to the northeast that conveniently stops by our town now. (Oh, and had an accident and attempted coverup that was fairly controversial, at least on the Chinese internet.) 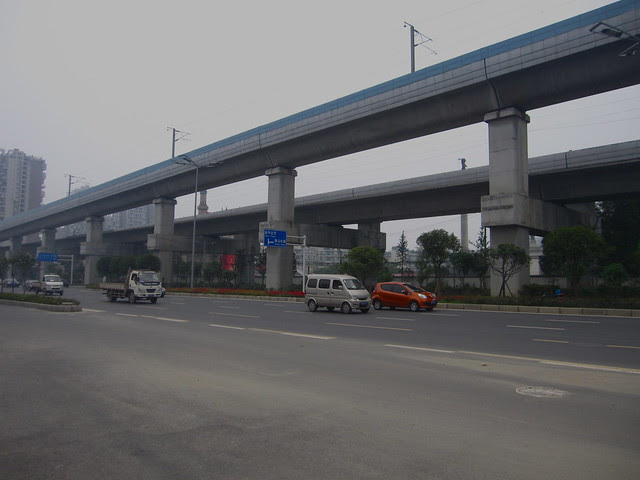 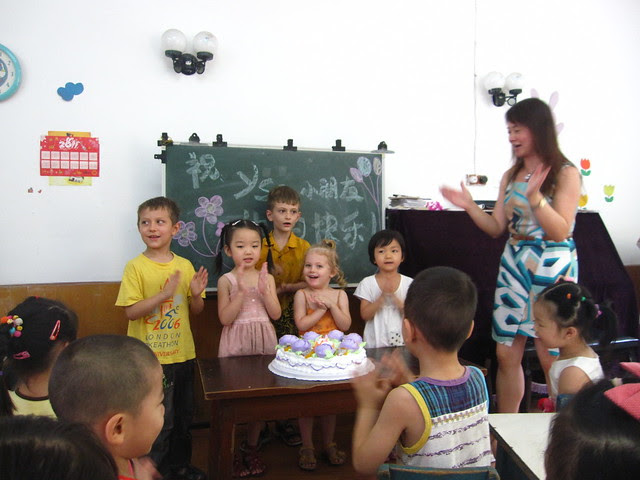 Also before I left: Ysa turned four years old, which shouldn't be terribly surprising, as she turned three around a year ago, I guess. But there's always that little bit of, "Wow, where did that year go off to?" She had a party at kindergarten and a party at home, and a splendid time at both, with new friends that she's getting to be old enough to appreciate and interact with in ways that she didn't when she was three. 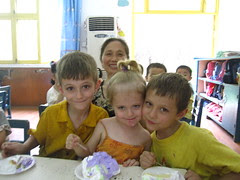 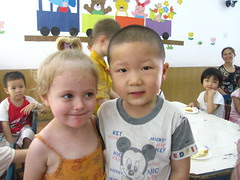 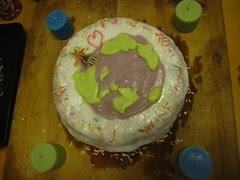 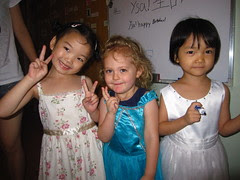 Oh, and by the way, you'll pardon me if many of my posts while here in the States are about regular ol' family events in China, right? It's a bit strange to be in my home country, but away from my home city, and missing family that are at home on the opposite side of the world... Guess I did know the risks of such surrealism when I signed up now, didn't I?
Posted by Dave No comments:

but I'm going to post a picture anyway, if only for momentum's sake... 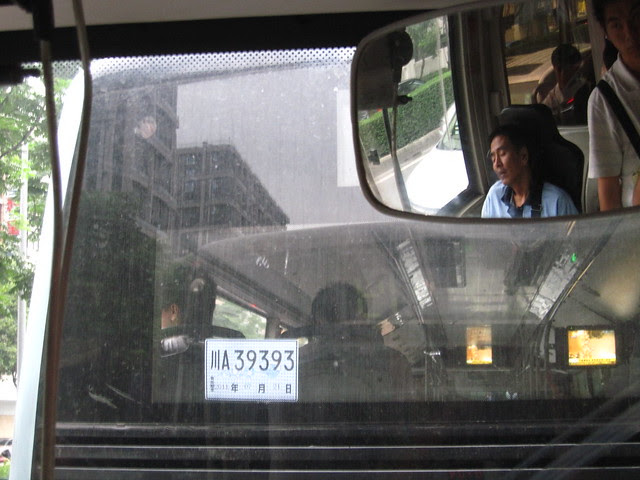 I was taking a bus during rush hour, and at every red light, the driver would lean back, close his eyes, and start snoring gently. When the light turned green and the bus ahead in the line of traffic started moving, he would awake with a start, gun the motor, and drive ahead until traffic was stopped at the next red light, at which point he would tilt his head back, and start the procedure all over again. Seemed like a workable system to me...
Posted by Dave No comments:

Travel the world over, and no matter if it's a grass hut or Buckingham Palace, one of the first things you're likely to hear from your hosts is "oh my gosh, sorry about the mess!". I suspect that this is because, deep down inside, most of us (Buddhist monks excluded) have an awkward relationship with our Stuff, and how the state and amount of said Stuff compares will other people's Stuff.

Or maybe the place is a bit cluttered because, oh, it's Saturday morning, you're planning to travel back to the States on Monday, and you are procrastinating all the packing and planning you need to do by just a bit and taking pictures of your apartment for some silly "then and now" project that you're blogging about. (Yes, that would be me I'm talking about...)

In any case, since I've had many friends ask us what our apartment in China is like, I present you, in all of its eternally transitional glory... our apartment! (And if you ask me, I think the 2011 version looks better. Don't you?) 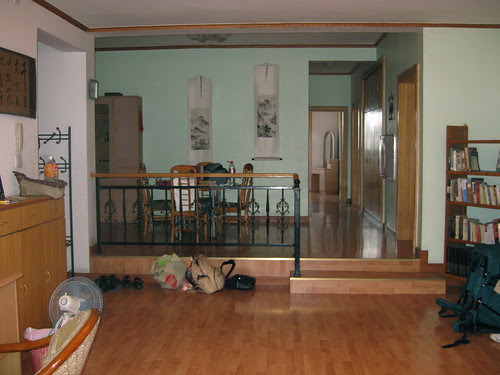 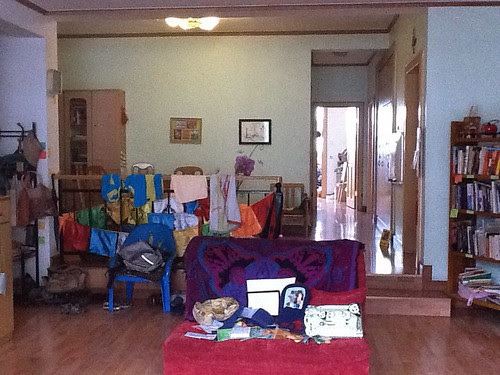 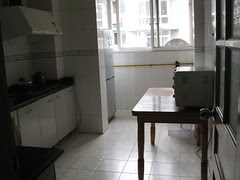 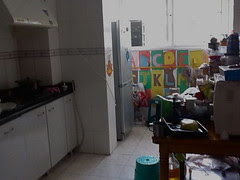 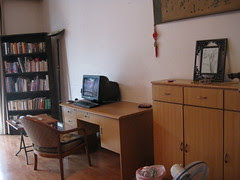 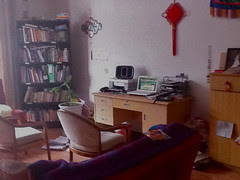 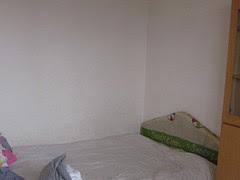 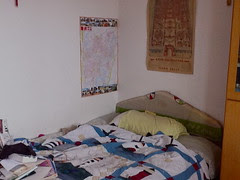 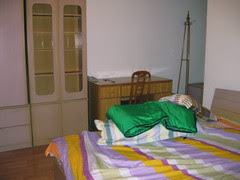 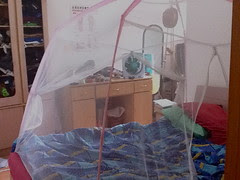 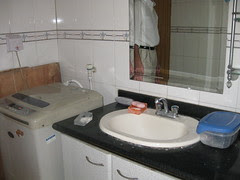 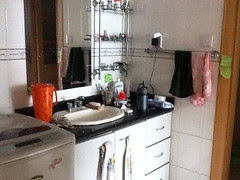 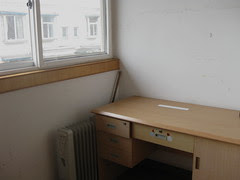 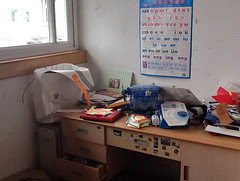 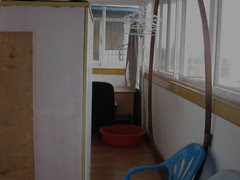 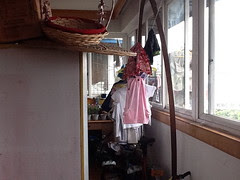